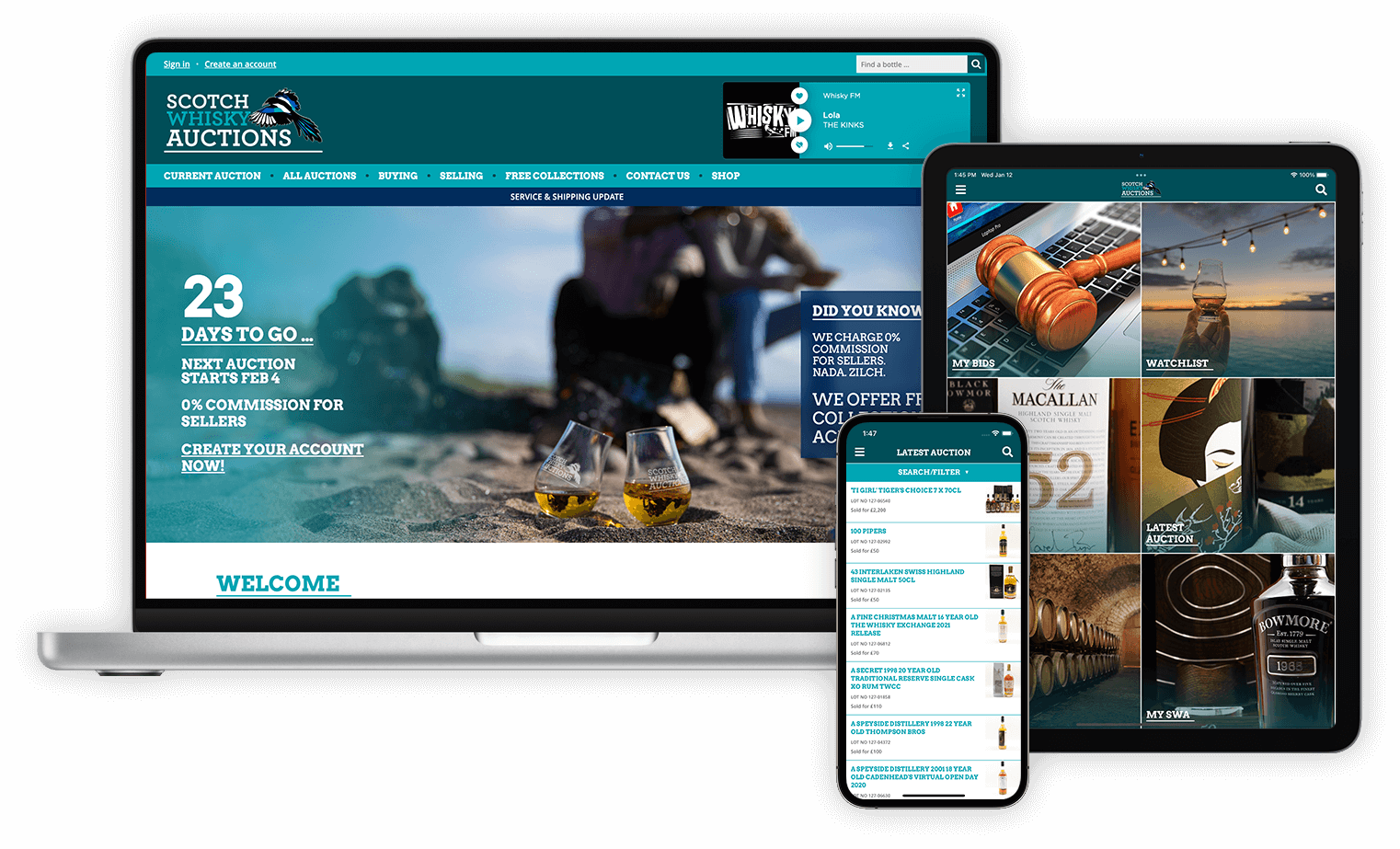 We began working with Scotch Whisky Auctions at the very outset of their business, back in early 2011. The founders had the idea of taking traditional auctions of whiskies online for the first time – something nobody else was doing at that point – and asked for our help to build a custom website to do this.

The first auction ended on May 1, 2011, and it has since been followed by more than 100 – settling down to one auction running per month. From an initial batch of 112 bottles, the site has held auctions with more than 10,000 at a time,

We’ve worked closely with the SWA team throughout their life, adapting the site to grow with them. This has included adding lots of behind-the-scenes features as well as refining the user experience on the front end and ensuring that the site can handle huge increases in traffic.

We also built SWA’s first app, running across iOS and Android, in 2013 and have updated that in parallel with the site.

The most recent iteration of the site went live in April 2021, to coincide with the 10th anniversary of the first auction.

This was a complete rebuild from the ground up, examining every area of how both the site and the behind-the-scenes systems work and refining them wherever possible.

This resulted in a much smoother user experience, providing bidders with a whole host of information they couldn’t see before and giving a much easier interface for winners to request bottles be sent, stored or collected.

With details of around 500,000 bottles now held, we also did more work on ensuring the site was stable and continued to run smoothly.

On a technical level, we made some substantial changes to the way individual pages are loaded, so that they appear within the overall structure without the whole thing needing loaded every time – particularly important as the site now integrates a radio player and reloading the pages would stop the music otherwise!

The apps were also updated in tandem with the refreshed site, ensuring full integration and giving users the ability to complete tasks such as paying for bottles they’d won and requesting bottles be shipped to them through the app for the first time.

We have worked closely with David and the team at fuzzylime for a number of years. We’ve found them to be innovative, straightforward and reliable and always on hand to help if there is an issue.

In the last 12 months we have launched a new website and app which has been a real game changer for us. The team at fuzzylime really took the time to drill down into the brief to deliver a custom solution for us and delivered as promised.

The look and feel of the website and app mirror our core beliefs as a company and as our main outlet benefit us a great deal.

More of our work